Just released by the Chicago Police Department at 9:10 p.m. this evening: 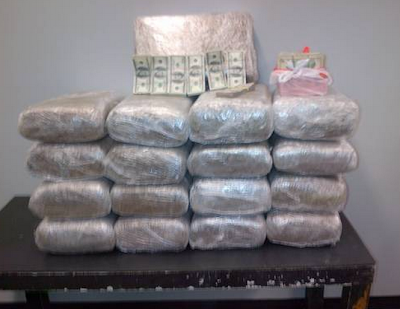 CHICAGO – Chicago Police Narcotics Division officers arrested two men and seized cannabis valued at more than $3.6 million on Tuesday morning. The investigation additionally resulted in the recovery of more than $147,000 in illegal monies and the submission of property to the Drug and Gang House Enforcement program.

Eduardo Magana-Solano, 48, of the 3800 block of W. 71st St. and Braulio Saucedo, 28, of Kingser, Calif. each were charged with one felony count of Possession of More than 5000 Grams of Cannabis.

As part of an ongoing investigation, members of Chicago Police Narcotics Division were conducting surveillance on the 3800 block of W. 71st St. Tuesday morning when they observed Magana-Solano removing a large plastic bag from a vehicle located in a garage at that location. At that time, the plastic bag ripped open, revealing large bundles of cannabis in plain view. Saucedo began to assist Magana-Solano in recovering the spilled contents. Officers responded to the scene and placed both subjects into custody.

Further investigation revealed a total of 226,796 grams of cannabis valued at more than $3.6 million. Additionally, officers recovered more than $147,000 in cash. The property was submitted to the Drug and Gang House Enforcement Program for appropriate action.

Magana-Solano and Saucedo were scheduled to appear in bond court on October 23, 2013.