Few things say as much about a neighborhood as how it responds to the misfortune of one of its own.

Here's why the Southwest Side (and in this instance, the Clearing neighborhood especially) has always been and remains one of the best parts of Chicago.

~ ~ ~
Matt Bragiel is a fun loving, typical 16 year old teen who loves to camp, fish, play video games, hang out with his big brother, Joe, tease his little sister, Sara, and of course cheer on his Chicago Blackhawks.

But unfortunately, Matt hasn't been able to do any of these things this year.

In March 2015, Matt was diagnosed with stage 4 Non-Hodgkin's lymphoma.

Matthew has a long road ahead of him, as he will be in and out of the hospital for at least six to eight months, receiving one of the most aggressive chemotherapy treatments available. As you can understand, the medical costs that the family is incurring at this time are astronomical.

Matt's mother, Kathy, is a hard working, loving mother that works as an administrator at St. Rene Elementary school to make ends meet. In a few short weeks, she will be losing her job as St. Rene is closing its doors permanently.

Matt's father, Dwayne, is a 20-plus year veteran of the Chicago Police Department who routinely works part-time and off-duty jobs to support his family.

We are gathering to support Matthew and his family in their time of need. With your love, support and prayers, Matthew will make a full recovery. A donation of any amount would be greatly appreciated.

~ ~ ~
The prayer service was organized by a dedicated corps of volunteers who are among the best people you'll find in Clearing or anywhere in Chicago. They know who they are, but you won't see them taking bows because they'd rather keep the focus on Matt and his family.

Sadly, Matt was not able to attend the prayer service, but his dad and other family were there.

Before the prayer service, in the church narthex, Dwayne said that his initial reaction to Matt's diagnosis and struggle was to simply "close our doors and windows and fight this fight ourselves"--a common and stoic reaction you'd expect from a regular joe from the Southwest Side, where folks like us meet adversity head on, shoulders squared as we plow our way forward through life.

But as the clock counted down toward 7 p.m., a flood of people walked in, some still in work clothes. St. Rene moms and dads, and boys and girls were there in force. The principal of St. Laurence High School, Jim Muting, was there to show that the Vikings stand with Matt--as they have so often through the years with their students and families. Others from the neighborhood, a few total strangers even, were there to pray in word, in song and in silence, all for Matt and the Bragiel family.

Several prayers were offered, and the Rev. Thomas Bernas, St. Rene's pastor, read a passage from the Gospel According to Matthew:

Come to me, all you that labor and are heavy laden, and I will give you rest. Take my yoke on you, and learn of me; for I am meek and lowly in heart: and you shall find rest to your souls. For my yoke is easy, and my burden is light.

Dwayne acknowledged that he was overwhelmed by the kind-heartedness and generosity that has flowed forth in so many ways from so many different people.

"When something like this happens, you always think it's supposed to happen to someone else---and it happened to us," he said from the St. Rene pulpit. "At first, I was selfishly asking God, 'Why me?' But then I thought about it and thought, 'Why him?' I'm 49 years old. I've been around the block a few times. Matt didn't do anything to anyone to deserve what he's going through now..."

He added his thanks to everyone "for all the meals, the well wishes, the prayers, the phone calls, the texts, and so much more."

After the prayer service, some of the people in attendance gathered at the altar for an informal group photo. Here's an indicator of how many people were there: our photographer's lens was not quite wide enough to capture the group, so here are two shots: 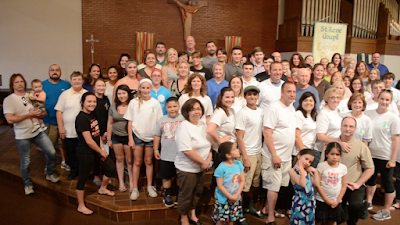 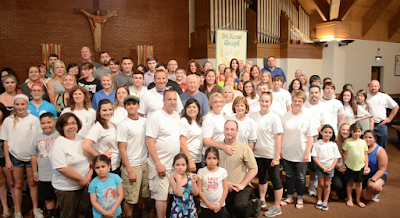 First, keep him in your thoughts and prayers.

Second, click on this link and join Team Matt by making a donation.

It's what neighbors do here in Clearing, on the Southwest Side of Chicago.