Police will do all they can to fight crime in the Chicago Lawn (8th) District, and citizens can 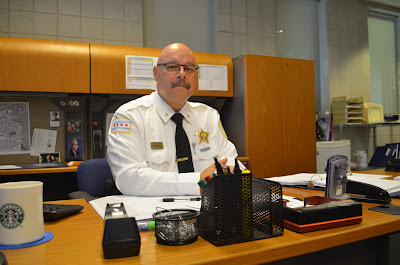 A day after he took the reins as commander, Pontecore sat down to talk about his plans.

“I love them,” the new commander said of neighborhood watch groups and block clubs as he recalled successes they contributed to in another district where citizens used such tactics as positive loitering to roust a drug dealing operation in a house.

“Criminals expect the police to come out and do our jobs,” he said. “What they often don’t expect is when the community comes at them from the other end, but working in concert with the police. That really throws criminals for a loop.

“When that happens, we typically have more success,” he continued. “Criminals need to know that people in a neighborhood won’t put up with their behavior. They need to know that ‘if I go hang on this corner, not only will the person at this house call [911], but this one is, this one is and this one is.’”

In what will doubtless be music to the ears of Garfield Ridge and Clearing residents, Pontecore said he will “have the same commitment” to their neighborhoods as did Commander John Kupczyk, a highly respected and admired police official who died suddenly in January 2012.

“I understand that we have our issues on the east end of the district, but we cannot forget what happens on the west end, as well,” he said as he discussed “beat integrity,” a Kupczyk tactic designed to ensure that beat cars in the district’s west end stay in their beats and are not redeployed to east-end hot spots.

“Beat integrity will be my number one priority,” Pontecore said. “Beat cars will stay on their beats, and they will be responsible for their beats.”

Pontecore also praised citizens who attend monthly CAPS beat meetings, “especially those who attend regularly. They may not always have a problem to bring up, but just by being there, they show that they have an interest in their neighborhood—and they know the value of persistence in fighting crime.”

The new commander described himself as a leader who “leads from the front” and said he is committed to being visible at CAPS meetings and other community events. “I want to be out there and hear for myself what people are thinking,” he said. He has worked in the district for about the last six months, in a top position helping lead while his predecessor was on medical leave.

He also plans to make sure officers in the district “make more contact with the community. I want to see my officers out of their vehicles. I want to see foot patrols at least once or twice during their tours of duty—and when weather permits, I want to put the bicycles back out again.”

In what will most likely be cheered by the Archer Heights Civic Association and other groups battling “quality of life” crimes like prostitution and traffic violations, Pontecore said he will work to use CPD resources—typically specialized units that operate citywide—to confront the so-called lesser crimes.

In recent months, Archer Heights residents and others complaining about prostitution near 49th and Cicero and other concerns have essentially been told by police that CPD’s focus on “index” crimes like homicide, battery, robbery and sexual assault means that resources are mostly unavailable to fight other crimes.

Pontecore grew up in a family-owned six flat on 38th Place in Brighton Park. He was the fourth generation in his family to enroll at the old St. Joseph and St. Anne School. When the family moved to 57th and Troy in 1976, Pontecore transferred to St. Gall School. He graduated in 1982.

He went on to Brother Rice High School, where he was a linebacker for the Crusaders. As a senior, his team upset powerhouses St. Laurence and St. Rita and went all the way to the IHSA championship game before falling to East St. Louis.

He then earned a bachelor’s degree in psychology (with a minor in business) from DePaul University. He later worked as an assistant mill buyer with Ryerson Steel.

Years later, prodded by a friend who wanted to be a police officer, he took the police exam.

“I think in my family, the expectation always was that I’d be a fireman,” he said, noting that his father is a retired CFD captain and that other men in the family have served as firefighters.

“Don’t get me wrong, I have nothing but respect for firemen—I mean, those guys are crazy, running into burning buildings when the rest of us are running out,” he said with a smile. “But [a career as a policeman] turned out to be my path.”

Pontecore became a policeman in 1991 and met his future wife, today a CPD detective, in the police academy. They live on the Northwest Side and have three adult children, including two in college.

He also holds a master's degree in criminal justice from Lewis University.