One of the six has been identified publicly by the Cook County Department of Corrections: Leonardo Gallegos, 17, of 49th and Karlov. Gallegos is scheduled to answer charges in Cook County Circuit Court Branch 48, 155 West 51st Street,  on Friday, June 21, according to the DOC.

Shortly after midnight Friday, June 14, police responding to the call about suspicious persons near 51st and New England said they saw five of the six teenagers sitting in a parked car.


A computer check showed that the car, a 2008 Mitsubishi Lancer, belonged to a 50-year-old Burbank man and had been reported stolen about 24 hours earlier from a home near 47th and Kedvale.

The five teens were taken into custody. When asked by police where the keys to the stolen vehicle were, the boys reportedly said that the sixth teen (Gallegos) had them, but he was not there at the scene.

Police searched the stolen vehicle and said they found three GPS navigation units that had been stolen from three different vehicles in the area (one in Garfield Ridge, two in Central Stickney). Police returned the three units to their owners.

Further, they reportedly found cans of spray paint (white and pink) in the stolen vehicle. The boys also had white and pink paint on their hands. They then reportedly admitted tagging four buildings on the 6300 block of south Archer. Police noted that one of the designs in the graffiti matched a design found tattooed on the left wrist of the 15-year-old.

The five gave police Gallegos' name and physical description. Police then transported them to the Eighth District Station for processing.

A short time later, police securing the stolen vehicle near 51st and New England said they spotted Gallegos driving a 2001 Toyota Cellica. They followed, and near a dead end at 51st and Oak Park, the teen bolted from the car and fled on foot. Police pursued and caught him soon after.

They said Gallegos admitted stealing the Toyota minutes before from a garage on the 5100 block of south New England. The teen allegedly claimed the garage's service door was unlocked, as was the car's doors. Gallegos allegedly said that while he was searching the car, he spotted the car's keys a the cup holder. At that point, he reportedly said, he started the car, opened the overhead door and stole the vehicle.

(Editor's note: A few hours later, 23rd Ward Streets and Sanitation Superintendent Al Cacciottolo was informed of the graffiti and personally led the effort to eradicate it within a short time.)

A Scottsdale neighbor who saw what turned out to be a crime in progress but did not call 911 unwittingly enabled burglars to make a haul from a home near 83rd and Kildare.

The victim, a 28-year-old woman, discovered that her back door had been kicked in and her home ransacked when she came home from work at 6:00 p.m. Wednesday, June 12. Stolen were a laptop computer, an iPad, assorted jewelry, 20 pairs of sunglasses, about 10 bottles of perfume and several items of clothing.

When police later interviewed neighbors as a routine part of the investigation, one neighbor said she had seen two men in a small gray or silver car in front of the victim's house earlier in the day. She said that one got out and rang the victim's doorbell. When there was no answer, he walked back to the car to speak with the driver. A short time later, the driver backed the car into the victim's driveway. The neighbor identified one of the two as a white Hispanic man with black hair and a light complexion. The CPD incident report did not indicate why the neighbor failed to call 911. 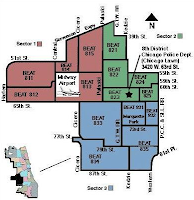 in Beat 811 (see map), come to the Good Shepherd Presbyterian Church at 7:00 p.m. Tuesday, June 18. Hear updates on crime in your neighborhood and learn how you can work with neighbors and police to make the community safer and better for all.

Police responding to a call of a burglary near 62nd and Kolin were met by a man who said he saw Garcia break into his neighbor's garage, but flee when confronted. Police said that they saw a lawnmower and assorted tools stacked outside the garage.

With a description provided by the witness, police combed the area and spotted Garcia sitting in a car near 62nd and Kostner. They detained him, and the witness positively identified him. Further investigation by police showed a nearby garage with its service door pried open.

Burglars forced open the service door of a garage near 53rd and Narragansett and stole a bicycle, a lawn mower and about a dozen plastic bins containing personal items.

Burglars broke through the bathroom window of a home near 53rd and Hamlin and stole two laptop computers, four tablet computers, two iPods, two cameras, a cell phone, assorted jewelry, a Wii, an Xbox 360, a PlayStation3, about 50 video games, and a DVD player.

The crime was discovered by the victim, a 41-year-old woman, when she came home from work at 3:30 p.m. Friday, June 14 and noticed the front door unlocked. She also saw an ornamental pedestal taken from her garden and placed under the bathroom window.

Burglars forced open a rear window of a home near 61st and Springfield and stole two TVs, an iPad, an iPod, a Wii gaming system and a purse.

Burglars forced open a side window of a house near 61st and Kolmar and stole a dog: a teddy bear-style Shih Tzu/Bichon mix, valued at $1,300, according to the victim, a 39-year-old woman.

The victim discovered the crime at 2:28 p.m. Thursday, June 13 when she came home and 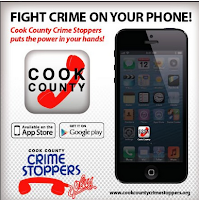 Burglars entered the back door of a residence near 63rd and Kildare and stole three TVs, two laptop computers, two PlayStation3 video game consoles, a gold chain, a gold watch and more than $1,300 cash.