Community action has resulted in a local landlord evicting several purported gang members who were renting a home near 52nd and Normandy, leaders of the Garfield Ridge Neighborhood Watch (GRNW) said on Monday.

The news was announced at the GRNW’s April meeting, held at Wentworth Park. About 40 people, mostly GRNW members, were in attendance.

“This was a situation where the elderly woman who owns the home had no idea she was renting to these type of people,” stated GRNW President Al Cacciottolo. “When it was brought to her attention, she was shocked; and fortunately, she responded quickly and did the right thing.

“I know a lot of us have been watching this house very closely in the past month or so; and you’ll notice positive changes there now that they (purported gang members) are gone,” he added. “Things have quieted down and are back to normal.” 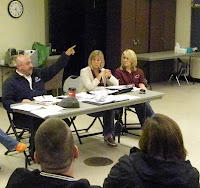 The house and its tenants had been a sharp point of discussion at the GRNW’s March meeting. Chicago Police Eighth District Commander David R. McNaughton, a speaker at the meeting, had vowed to contact the home’s owners and “call them in” for a discussion of the matter.

At that same meeting, McNaughton told everyone, “Gangbangers are like rats. They follow the path of least resistance. If they know the community will not put up with them, they will move on. They will leave.”

A day later, in response to a citizen call to 911 alleging that occupants of the house were flashing gang signs from the front porch, police searched the house and made an arrest in connection with a misdemeanor amount of marijuana and drug paraphernalia found on the premises.

Other matters discussed at the GRNW meeting included:

► a presentation on the Eighth District’s court advocacy effort, in which local volunteers attend select criminal court proceedings to display unity, support local crime victims and impress upon judges and everyone the community’s ongoing demand for justice. In recent years, local court advocates have played a role in the convictions of over 200 criminals on graffiti-related charges and more than $32,000 in fines. There are currently about 40 men and women who serve as Eighth District court advocates. “It’s the easiest volunteer work you can do,” stated court advocate and West Lawn resident Barbara Ziegler. “You work in teams with other people. All you do is go to court; and when they call the case you’re following, you stand up and look disgruntled.” For more information on becoming an advocate, call Ziegler at 708-269-8833.

► a recap of a successful thwarting of a burglar initially discovered inside a home near 53rd and Mayfield. The criminal had broken into the home at about 10:30 a.m., while a 92-year-old woman was in bed inside. Fearing for her safety, she pretended to be asleep while the burglar began to ransack the home. The crime was interrupted, however, when the woman’s 60-year-old son stopped by. The two men struggled briefly in a hallway before the burglar fled.  About 90 minutes later, the same man was arrested on burglary charges at a home near 55th and Meade. According to police, the man’s car contained items stolen from the house near 53rd and Mayfield.

► a report that alleged gang members have just begun renting a home near 56th and Narragansett, across the street from Kennedy High School. All community members were advised to watch the block closely and promptly report any suspicious activity to 911.

► an update on GRNW efforts to thwart trespassing and teenage drinking along the Belt Railway tracks near 59th Street.

► a few words of thanks from Kinzie School Principal Martin McGreal and Assistant Principal John Keith for GRNW support of efforts to prevent graffiti around the school. “If you see anything, please let us know right away,” McGreal said. “We have paint and are ready to address graffiti quickly and effectively.” GRNW members on patrol were also asked to keep an eye on the below-ground stairwells on the Kennedy/Kinzie campus and report any teenagers congregating there at night.

► a brief appeal for monetary donations from local businesses and individuals to help the GRNW purchase gasoline cards to reimburse members who patrol in their vehicles, as well as buy signs and other educational/motivational materials.

► an update on GRNW efforts to help a local homeowner of limited means remove raccoons from an attic near 56th and McVicker, after Chicago Animal Care and Control refused to remove them or provide a trap. GRNW volunteers are purchasing Shake-Away repellent (concentrated coyote urine pellets) and using them to dislodge the raccoons.  They are also patching the entry hole in the roof.

► an update on GRNW efforts to assist a local homeowner of limited means near 58th and Neva. The GRNW has secured donated lumber and is seeking volunteer carpenters to mend a 15-foot section of dilapidated fence in the back yard.

► a brief discussion of ongoing efforts to stop businesses from taping unsolicited advertising leaflets to local garages and front doors, as well as a discussion of illegal posting of “garage sale” signs on public property, and of illegal and unsightly front-yard sales.

► a “save the date” announcement that the GRNW and the Archer Heights Credit Union will host a “Neighborhood Awareness Day” from 10:00 a.m. to 1:00 p.m. Saturday, May 19 (Editor's update: date has been changed to Saturday, June 2) on the northeast corner of Archer and Nashville. The event will include crime prevention and community improvement information, as well as a limited amount of free food and refreshments. Details will be announced soon.

► a reminder about the Chicago Police Department’s burglary prevention seminar set for 11:00 a.m. to 1:00 p.m. Saturday, April 21 in the first-floor auditorium of Daley College, 7500 South Pulaski. For everyone’s convenience, the GRNW is offering a free bus ride to and from the event. The bus will depart at about 10:15 a.m. from Lindy’s/Gertie’s, 6544 West Archer. To reserve a seat on the bus or for any information about the GRNW, visit www.garfieldridgenw.com.


(Video below: CAPS facilitator and Archer Heights community advocate Michael Kovac offers a few words of praise for the GRNW.)