A recent suburban crime report I read--in which a lawn ornament was stolen--reminded me of my own quirky experience with my front-porch gnome. It occurred a few years ago. I wrote about it on a mom-blog I authored at the time. Thought I'd share it with you here on swchicagopost.com

Do you know where your gnome is?

I thought I did.

Until recently, when I learned he's a late-night party boy.

You think you know your gnome.

For some five years now, my gnome has faithfully held his battery-operated lamp aloft on our front porch, a cute miniature beacon of welcome on our Southwest Side street.

Our gnome and his glowing lamp are the last thing I saw when I shut and locked our front door for the night; and the first thing I saw in the morning when I opened the door. Still standing, lamp still lit, a silent sentinel of sameness and sanity.

But the letter changed everything.

A letter in my mailbox addressed:

To owners of Beloved Gnome.

And this is what I saw: 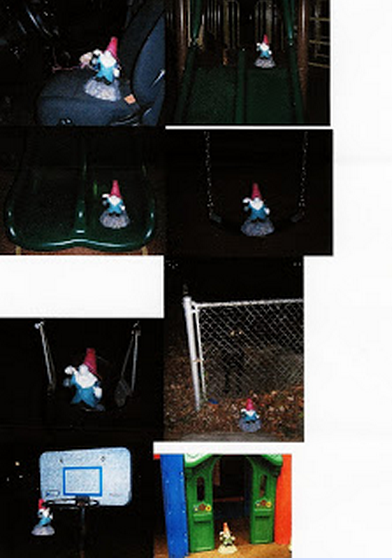 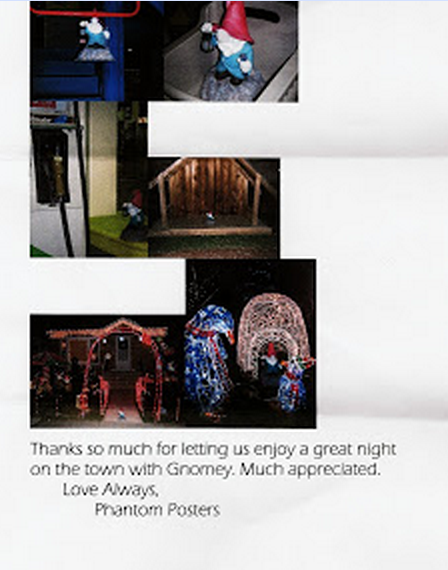 Gnome at a local park playground. Gnome on the slide. Gnome on the swing. Gnome hanging onto a basketball rim (presumably, a moment after he executed a 360-degree gorilla dunk).

Gnome in a child's playhouse. Gnome checking out the neighborhood Christmas decorations. Gnome posing next to a ferocious-looking, red-eyed dog with black fur (wisely, Gnome made sure there was a chain link fence between himself and Cujo).

Most disturbing of all the photos: Gnome behind the wheel of a car (let's hope he wasn't drinking!) and Gnome at the pump of a local gas station (let's hope he paid for the gas and didn't try to run off).

The message written next to the photos reads:


Thanks so much for letting us enjoy a great night on the town with Gnomey. Much appreciated. Love Always, Phantom Posters

As you might imagine, my teenage daughters thought the whole thing was hilarious, and they wondered aloud why I was a little perplexed and suspicious at first.

"Mom, it's funny! So what if somebody kidnaps our gnome for a night and had a good time with him! They returned him to the front porch in the end, right?"

True, they did. But that wasn't what had me suspicious.