Burglars opened the rear sliding door of a home near 61st and Menard and stole a cell phone, and a wallet that contained credit cards and ID cards.

The victim, a 52-year-old man, told police that the crime occurred at about 2:15 a.m. Tuesday, July 8. He said he was asleep on a couch when he heard someone walk past him and into his bedroom. He mistakenly assumed it was one of his sons looking for something and learned hours later that a crime had been committed.

Police said the victim’s debit card was used a short time later at the 7-Eleven at 5953 West 63rd Street to buy nearly $75 in merchandise.

Menard while he was away on vacation and stole a TV, a camera, a DVR unit, an Xbox video game console, an air compressor, two electricity generators, and a Crystal Head Vodka decanter signed by actor Dan Aykroyd.

He discovered the burglary at 10:00 p.m. Sunday, July 6. There was no sign of forced entry, and the victim gave police the names of two relatives he thinks may have stolen the items.

A 16-year-old West Lawn boy was shot in the right thigh by a gangbanger at the mouth of an alley near 67th Place and Hamlin at 10:26 p.m. Tuesday, July 8.

The youth told police that a man in a car drove up, shouted a gang slogan, got out of the vehicle and fired at him. The victim tried to run away, but later collapsed in front of 3909 W. Marquette Road. He was transported by CFD ambulance to Christ Hospital. The description of the shooter was vague and limited to a Hispanic man.

A 17-year-old Clearing boy was arrested and charged with motor vehicle theft after police said they found him driving a stolen SUV in the 6100 block of West 63rd Street at about 10 a.m. Saturday, June 21—an hour after the vehicle was reported stolen from in front of a house near 62nd and Major.

Police said that after they curbed the vehicle, the teen bailed out and fled on foot. After a chase police described as “intense,” the boy was apprehended and transported to the Eighth District police station. The arrest was touted as a “success story” by CPD officers at the July meeting of CAPS Beat 812.

The two told police that two men approached and demanded the chain. When the girl refused, the robbers blocked her path and then snatched the chain, fleeing on foot west on 64th Street. In their haste to flee, they dropped the gold chain but kept the cross.

They are described as Hispanic men age 20-25 olive complexion. One is 6’0 and 160 pounds, with brown eyes and black hair in a fade. The other is 5’5 and 20 pounds, brown eyes, black hair in a bald style. Both were wearing blue denim shorts.

A 15-year-old West Lawn girl was robbed of a gold chain with a Virgin Mary medallion attached, as she walked down a sidewalk in front of 4300 West Marquette Road at 1:40 p.m. Tuesday, July 8.

She told police that she was approached by two boys, one of whom held an unknown object in his hand. The other snatched her chain, and both offenders ran away. They are described as Hispanic boys age 15-17, 5'5 and 140 pounds, short black hair, olive complexion.

Burglars forced their way through the side window of a home near 62nd and Nagle and stole a bracelet and a pair of diamond earrings. The crime was discovered by the victim, a 54-year-old woman, when she returned from vacation at 6:15 p.m. Thursday, July 10.

Burglars kicked in the back door of a home near 64th Place and Springfield and stole an iPad, a Kindle Fire, eight earrings, seven gold rings and a coin bank in the likeness of a lion. The crime was discovered by the victim, a 57-year-old woman, when she came home at 12:01 a.m. Sunday, July 13.

A burglar entered the unlocked service door of a garage near 54th and Lawndale and stole a bicycle and a battery charger. The crime was discovered by the victim, a 24-year-old man, who told police that surveillance video showed that the offender, identified only as a black man, committed the crime at 4:30 a.m. Friday, July 11. 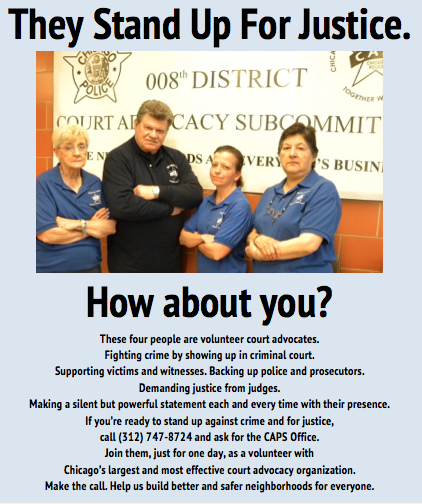 Burglars pried open the side window of a home near 47th and Springfield and stole two TVs and a laptop computer. The crime was discovered by the victim, a 31-year-old woman, when she came home at 9 p.m. Wednesday, July 9.

Burglars kicked in the back door of a home near 67th Place and Springfield and stole assorted jewelry, two bank books, a set of collectible coins, and $300 cash. The crime was discovered by the victim, a 57-year-old woman, at 4:00 p.m. Monday, July 7.