Survival in the “concrete jungle” is a matter of awareness, not physical prowess, a group of Garfield Ridge men and women were told Monday night.

“Anything that moves can kill you,” said Nick Moran, a Marine Corps veteran and lead instructor at Innovative
Survival Arts (ISA), 6537 W. 63rd St, to a group of more than 50 people at the July meeting of the Garfield Ridge Neighborhood Watch, held at European Chalet Banquets at the Mayor's Mansion, 5445 S. Harlem.

The worst threat to people’s awareness is something that everyone carries on them: 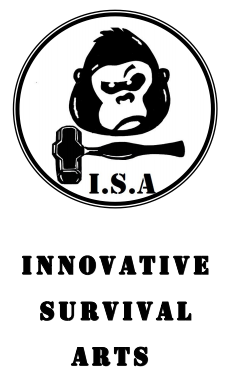 the smart phone. As people "plug into" their smart phone, they are unplugging from what is around them. That puts them into dangerous situations, Moran said. It brings about “constant partial attention,” which means people are not aware of what’s around them, that their area awareness shrinks to what they are looking at on the screen, and not what is directly around them. This makes individuals targets for criminals.

“There is a predator/prey relationship in the jungle. Predators in the environment look for weaknesses,” Moran said. “Criminals are looking for people who are not paying attention.”
Moran’s first tip was a simple one: “pick your head up.”
Criminals, he said, are looking people who are not aware. To avoid being a victim, Moran said to make eye contact with people, be polite, be friendly. He also prescribed “360 degree awareness,” people knowing what’s around them, in front of them and behind them when they are out walking the streets.

Give Up the Goods, Not Yourself

If you do come in contact with a criminal who wants something of yours, be it cell
phone, jewelry or wallet, what do you do?, asked Moran.

“Give it to him,” the audience answered immediately.
“Right. Anything you own can be replaced," Moran said, “You can’t be.”
However, he added, if a criminal wants you to go to another location, when do you go?
“Never,” was Moran’s blunt reply.
“According to FBI statistics, you have a 90 percent less chance of coming home if you go to a secondary location,” Moran said. “A kidnapping sentence is just about as long as a murder sentence. A criminal doesn’t have any incentive to keep you alive if you’ve seen something he didn’t want you to see.”
He told the audience to stay in the public eye on the street, make a lot of noise, attract attention so someone will call for help. “I’ll scream bloody murder if I have to,” Moran said.
“In an altercation, you want to survive and escape," he added. "Don’t be a Mike Tyson or Bruce Lee. The objective is not to get a lot of bruises, but to cause a few bruises and get out of Dodge."

Moran and Bucio then demonstrated some ways for a person to protect himself, or

herself as the case may be.

The first is to concentrate on the physical signals the criminal is giving you. This signs may include clenching fists or clapping hands and taking a half step forward on an angle. This is the time to “get your hands up,” Moran said.
Putting your hands up to protect your head and turning on an angle and making yourself smaller can help in a fight, he said.
A person’s first inclination is to make a fist and punch, but this can hurt an individual by breaking a wrist or arm, Moran said. Instead, a person can use a fist as a "gorilla hammer" to strike at a person. Individuals who are trying to get away from a criminal with as few bruises as possible can also use their elbows and knees, the hardest bones in the body, Moran said. They can also use their hands, open palm, to shred and gouge an opponent. Biting is also suggested if that works.

Even the Strong Are Weak

To survive a physical alteration, go for the weak points on the body, Moran said. Those are the eyes, ears, nose, face, throat, solar plexus, groin, shins, the top of the foot and fingers. As Moran put it, “fingers are the worse things for these guys. No matter how big these guys get, the pinkies remain tiny and week.”
He added, “If I disrupt his senses, it makes it more difficult to find me.  For instance, if I go for the eyes, he can’t see and can’t fight.”
He also added, “It takes eight pounds of pressure per square inch to remove the ears from the head. So, don’t wear eight-pound earrings, “ he said laughing.
Bucio played the “criminal” in the demonstration, and was the recipient of Moran’s self-defense moves. An audience member who may have felt sorry for Bucio shouted out, “Armando, there are better jobs out there than this!”
Moran and Bucio demonstrated some moves that had a person defending himself by using the open palm hand to go for the eyes, ears and twisting the person’s head away from him.
“Think of his head as a twist cap of a mayo jar, a giant jar of evil mayo and that lid needs to be taken off,” Moran said.
If a person is concentrating on other areas of the body, such as the groin, Moran said to “grab, twist and pull.” Raking along the shins, he said, destroys balance. If an individual is grabbed from behind, tucking the chin into an elbow helps a person breathe.
If you have any kind of “environmental weapons,” such as a pen, spoon or phone, use them, he advised. Chairs can be used as blockades to create a distance and allow more time to get away. A bottle of water can be smashed into a person face to discombobulate them and the sound of the crushing plastic is another distraction. Distract the criminal, disrupt his senses and then grab his pinkie finger back.
“The primary focus is to get away,” Moran reiterated.
“Self defense is a way of life, not just physical moves,” Moran concluded.

Do you like receiving crime-related news and other useful information, at no charge, from the Southwest Chicago Post?
There's one easy way to keep the news flowing, for free: patronize our advertisers. Stop by their stores and thank them directly for their support.
This month, please stop by Archer BP. Click here for details. Thanks!