The statements were made by CPD Sergeant Thomas Taglioli and several officers at a CAPS Beat 812 meeting held at the Clearing Branch Library, 6423 West 63rd Place.

The man shot and killed, 30-year-old Joel Bentley of the 5000 block of South Keating, was a member of the same street gang as the alleged shooter, Richard Magnan, 35, of the 2600 block of West 90th Place in suburban Evergreen Park, Taglioli said.

The shooting appears to have been accidental, police and prosecutors indicated earlier today.

Magnan is in custody and charged with involuntary manslaughter, unlawful possession of a firearm by a felon, and armed habitual criminal. He is set to appear in Cook County Circuit Court at 26th and California on July 28.

Anticipating that the slaying would be the hot issue of the evening, Taglioli carefully walked the group through a few of the details of what CPD detectives know about the shooting.

Taglioli himself was not among those who responded to the call at about 1 a.m. Saturday, July 5. His shift had ended about two hours earlier. But he held CPD reports and notes that he used to recount what he was able to disclose.

"Basically, when the first officers got on the scene [at about 1 a.m.], people that they interviewed, including the victim, gave them bad information. The victim himself stated that he didn't know who had shot him," Taglioli said. 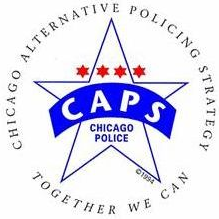 Police later interviewed an "independent, anonymous" witness who said that "it was a bunch of gangbangers out there, throwing up [gang] signs and taking pictures of themselves."

The action reportedly occurred in and near the alley immediately north of the Walgreens at 63rd and Austin, Taglioli continued. "It was 1 o'clock in the morning. All the fireworks were going on, all the bombs were going off. A lot of [911] calls we had for 'shots fired' were actually fireworks going off," he added.

He added that officers at the scene noted that there was a party at the home immediately north of the alley, but that everyone at the party claimed not to have seen or heard anything relating to the shooting--a revelation that caused groans of disbelief among many in the audience.

"But this is normal, folks, this is normal," Taglioli said in response, adding that the victim was reportedly "uncooperative and belligerent to the officers who were just trying to find out what the hell happened. We face this all the time, folks, even from victims."

Later, he added, detectives working the case uncovered "the true story," that the gangbangers "were out there, playing with a gun--and obviously, the guy with the gun didn't know what he was doing. He emptied the magazine, but there was still [a bullet] in the chamber. He pointed the gun at the victim, and a shot went off. I guess he thought the gun was unloaded. It wasn't.

"The victim was shot once in the abdomen and taken to Christ Hospital in serious condition," he continued.

Taglioli said that detectives soon tracked down Magnan via his cell phone, which he reportedly continued to use as he allegedly fled to a motel in suburban Willowbrook, where he was apprehended.

"He wasn't too hard to find," Taglioli continued. "He's been arrested before. In fact, in 2003 he was convicted of attempted murder and was sentenced to eight years [in prison]."

Magnan also "has two convictions for possession of a stolen vehicle and a 2004 weapon conviction from Nevada," according to a report in the Chicago SunTimes.

"I want you to know that it's an isolated incident," Taglioli emphasized. "Originally, it came out [among some people in the neighborhood] that it was a drive-by shooting, which was totally false. The case has been solved, and [police] are not looking for anyone else."

Several people in the audience said they understood that retaliation is not an issue to fear, yet voiced concern over who lives in the house in question and asked police if gangbangers live there.

Taglioli said he searched arrest records going back 10 years and found only one arrest--a domestic matter--at the address.

Officer Rachel Krass added that people who host house parties often do not have complete control over who shows up.

Taglioli also said, "I don't know if there was a relationship between that party and the shooting. I'm not putting blame on that house."