The FBI and other law enforcement agencies continue to investigate a strong-arm robbery of the BMO Harris Bank at 6400 S. Pulaski at 12:40 p.m. Thursday, July 24. 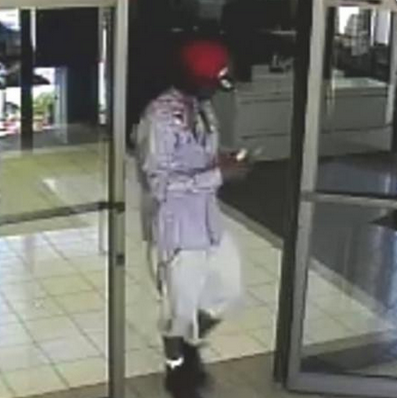 According to authorities, the robber handed a teller a note that read, "Give me $50,000 in hundreds."

The teller responded by handing over a stack of $100 bills. When the criminal demanded more, she gave him stacks of $50s and $20s.

A bank security guard said the robber fled out the front door, running west on 64th Street before jumping into the passenger seat of a silver Pontiac, when then sped north on Komensky.

Officials said that the robber dropped his red baseball cap and stick-up note at the scene.

A 21-year-old West Lawn man said by police to be an admitted gangbanger was arrested and charged with burglary and criminal trespass to land, after he allegedly was seen rummaging through a car near 62nd and Keating.

Arthur R. Beristain of 62nd and Kilpatrick was apprehended by police after a foot chase at 3:57 a.m. Wednesday, July 23.

The crime occurred at about 8:20 p.m. Wednesday, July 23. A short time later, the same burglars used the forklift to steal six pallets of boxed pedestal fans from a warehouse at 4500 W. 47th St., according to a police incident report. In all, 384 fans were stolen, with a total value of $10,000.

The criminals gained access to the warehouse by smashing their way through a loading dock door. Police said they were reviewing surveillance video.

A 34-year-old woman was stabbed by a robber in the backyard of her home near 50th and Kenneth.

The victim told police that she saw a man sitting in her yard at about 4:30 p.m. Tuesday, July 22. He reportedly stabbed her with a switchblade knife as he said, "Give me your f~cking purse, b~tch."

He fled on foot with the purse, and the victim was transported by ambulance to Christ Hospital, where she was listed in stable condition.

She described the attacker as a Hispanic man age 35-45, 5’6 to 5’7, medium complexion, wearing a black baseball cap and dark blue shorts.

A thug tried but failed to steal money from two clerks at Family Dollar, 5016 S. Cicero.

The clerk passed the note to the manager, who immediately kicked a safe door closed. The robber fled the store, running through the parking lot and then west on 50th Street. He is described as a black man age 28-33, 6’1 to 6’3 and 220-240 pounds, brown eyes, dark complexion, black braided hair, wearing a black baseball cap, gray t-shirt and blue jeans.

Stolen was the victim’s brown leather shoulder bag, which contained a wallet, cell phone, credit cards, driver’s license and $50 cash. The robber is described as a Hispanic man age 20-22, 5’6 and 170 pounds, light complexion.

A 36-year-old man from suburban Worth, who police said described himself as a panhandler who works the 79th and Cicero area, was shot by young men with a BB gun.

The shooting occurred at 5 p.m. Tuesday, July 22 at a CTA bus stop in front of 4755 W. 79th Street. The victim could only describe his attackers as Arab males in a white SUV.

Burglars forced open the front window of a home near 51st and Hamlin and stole a video game console, four gold chains, a tiffany necklace, and $280 cash. The crime was discovered by the victim, a 34-year-old man, when he came home from work at 6:30 p.m. Thursday, July 24.

Burglars forced open the front window of a home near 63rd and Kilbourn and stole two laptop computers, a desktop computer, a TV, assorted jewelry, two video game consoles, an iPod and $3,300 cash.

The same burglars also allegedly forced open the service door of the garage and stole assorted tools, a bicycle, a battery charger, a generator and an air compressor.

The crime was discovered by the victim, a 50-year-old man, when he came home from work at 3 p.m. Wednesday, July 23.

Burglars entered a garage near 53rd and Kolin and stole a snowblower, a circular saw, a jigsaw and a bicycle.

The crime was discovered by the victim, a 41-year-old woman, at 1 p.m. Tuesday, July 22. There was no sign of forced entry, and she told police she thinks rats may have triggered a motion sensor that raises the overhead door.

A 90-year-old West Elsdon woman who left a front window open a crack for ventilation when she left her house near 52nd and Hamlin, returned at 2:30 p.m. Tuesday, July 22 to find the premises burglarized and an unknown amount of jewelry missing.

Burglars broke through a bathroom window of a basement apartment near 49th and Kildare and stole a DVD player and $350 cash.