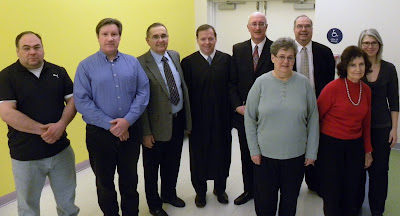 The newly installed officers of the Archer Heights Civic Association pause for a photo after being sworn in by Circuit Court Judge Daniel B. Malone (fourth from left), a fellow Southwest Sider, at their January meeting.

At the meeting, Baliga praised Lihosit for his many years of service to the AHCA, including a total of 18 years as president.

To learn more about the AHCA, call 773-843-2232 or attend the next meeting. AHCA meetings are always the second Wednesday of the month, with the exception of July and August, and always start at 7:30 p.m. at the UNO Veterans Memorial Campus, 47th and Kildare. All Archer Heights residents are encouraged to attend.

The Southwest Chicago Post congratulates the AHCA's new officers. Truly, you are the few doing the work of the many; and the neighborhood is a better place because of your generous donation of your time, energy and talents.