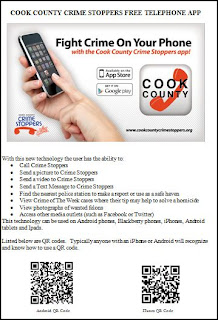 According to Crime Stoppers, the app includes several interactive features that will give Cook County residents the ability to alert police in real time about a crime or potential crime. Users may send police their tips through photos, videos, emails and text messages.

The app also includes a button that automatically dials the Crime Stoppers phone number and features a GPS system which users can choose to enable, as well as a database of some of the county’s local law enforcement agencies. The app does not collect any personal contact information such as emails, phone numbers or locations, according to Crime Stoppers.

The app was developed in Canada and initially released in July of 2012. According to Crime Stoppers, the app met with great satisfaction from the community, as it was being downloaded over 10,000 times a month.

On behalf of Cook County Crime Stoppers I want to thank you for being here here today as we announce the release of our new Smartphone app.

Crime in the occurs at an alarming rate.  In the there is a murder every 35 minutes; a robbery every 90-seconds and in 43% of these robberies, the offender used a gun; an assault on a person every 39 seconds and a burglary every 14 seconds and of these burglaries – 74% occur in our homes and during the day.

I believe the statistics in and occur at a lower rate – they still occur.

Criminal activity is not only a concern for all of us, but also a concern for our law enforcement agencies, prosecutors and politicians.  These dedicated crime fighters spend a majority of their time trying to make our communities safe for us.  But we cannot expect them to fight crime alone.  This battle against crime must be a cooperative effort by all of us.  I have heard from many of you a concern for your safety about reporting a crime, and therefore you tolerate it occurring.

We cannot tolerate criminal activity.  We must work together to make our neighborhoods safer.

At Crime Stoppers we know when citizens do get involved, criminal activity drops.

You have called in over 9,000 tips on felony level crimes to Cook County Crime Stoppers which has resulted in over 2300 cases being solved, over 2,500 offenders arrested, 175 guns taken off the streets and 21 million dollars in illegal narcotics and stolen property recovered.

These are great results and a testament to those citizens that have taken a step against criminal activity.

Together we can make 2013 a safer community for our families, children and neighbors.

Law enforcement officers, prosecutors and Cook County Crime Stoppers ask you to get involved, we need your help.  I honestly can understand, at times, the concern and fear about giving information.  But if we don’t join together, that criminal activity will continue and may result in you or a family member now becoming a victim.  Something none of us wants to happen or tolerate its occurrence because it could have been avoided.

This is why we joined together with Cellflare to develop our new crime fighting telephone app.

The app was developed for Android, Blackberry and iPhones as-well-as Android tablets and Apple iPads.

I know you all will be interested in this, we are just releasing the app, but this morning we did receive a tip from the app on a homicide case.  The tip was sent to police for follow up.

Protect is one of our sponsors for Crime Stoppers.  We ask that you take a moment and talk to the folks at Protect and see how they can help you make your home safer and improve the safety for you and your property.

We also have Muve media here.  Over the next few months you will their green truck driving around and displaying the app.  They have donated their time to this project and we will welcome their partnership to help make you safer in your community.  As I said before, it takes all of us together.

Cook County Crime Stoppers is a non-profit 501 (c) 3 organization which receives tips from the citizens of Cook County on felony level crimes. The tipsters are given anonymity and their tips are turned over to local law enforcement for investigation. If a tip results in an arrest, the tipster is eligible for a cash reward.  Cook County Crime Stoppers does not receive any federal, state or local government funding and relies upon donations and advertisement.