While no one at Tuesday night's meeting of the Clearing Civic League sang "I've Heard That Song Before," there was some skepticism expressed in response to the newest political promise to do something about traffic tie-ups caused by trains. 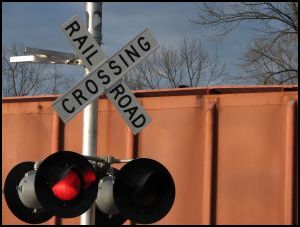 Lila Sepulveda, an aide to State Senator Martin Sandoval (who now represents Clearing after the recent remap), spoke with a couple dozen people at the January meeting of the Clearing Civic League, held at Hale Park.

Sepulveda, herself a Clearing resident, empathized with frustration over the tie-ups---claiming she was late to work every day because of lowered gates caused by the trains that lumber through the area.

An audience member chimed in with her own story of story of “wasting 25 minutes for a train to pass” and being late for work.

Sepulveda said that grade separations (such as an underpass) are the answer to delays. She said that Sandoval, a member of the transportation committee, has already sent a letter to the Illinois Department of Transportation requesting an estimate for underpasses with viaducts at two intersections: 63rd and Harlem and Archer and Central.

“He has the ball rolling. He understands your concerns and the need for grade separations,” Sepulveda said.

One audience member reminded Sepulveda of the flooding occurring at the underpass near 63rd Street and Archer Road (in Summit) due to heavy rains. Sepulveda said that Sandoval was very aware of that issue and getting it resolved.

Some audience members seemed skeptical that Sandoval or any politician could alleviate the traffic congestion brought on by lengthy trains moving slowly through the area and keeping railroad gates down for long periods of time.

One audience member reminded Sepulveda that the proposed Central Avenue Overpass (which would connect Clearing to Burbank) has been talked about for decades. His reasoning was that railroad companies had donated heavily to political campaigns and “...we’re not going to get it until the railroad says it’s OK.”

“Let’s give him (Sandoval) a chance,” replied Sepulveda.

The public discussion of traffic tie-ups caused by trains may continue with Sandoval's staff at the next meeting of the Garfield Ridge Civic League, set for 6:30 p.m. Monday, January 21 at Good Shepherd Presbyterian Church, 5556 South Merrimac. Sandoval’s chief of staff, Joe Garcia, will be guest speaker.

On a lighter and more cheerful note, the Clearing Civic League wished a happy birthday to Muriel Gelonese a day before she turned 102 on January 9. She is a lifelong resident of Clearing, born near 63rd Place and Central.

The Southwest Chicago Post joins the league in wishing her a most happy birthday...